Home Blog LifestyleFood And Wine The Most Beautiful Restaurants in London

The Most Beautiful Restaurants in London

Type 3 chars to begin the search... results will be shown below: 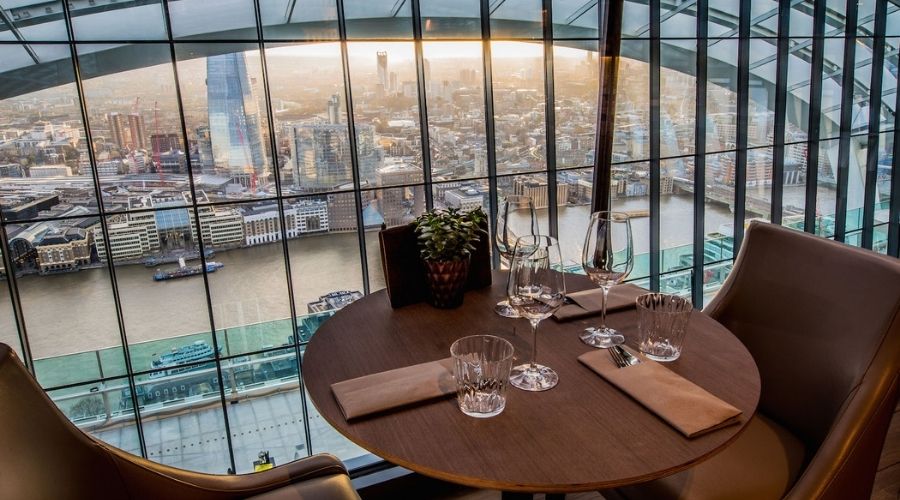 London has a plethora of stunning, Instagram-worthy restaurants, as is evidenced by the self-proclaimed #foodie photos flooding our feeds.

But it’s not just the food-as-art that’s getting its moment in the sun. Insta-friendly restaurants are enchanting us with avant-garde décor and interiors that are as tempting as the food itself. These are the most beautiful restaurants in London. 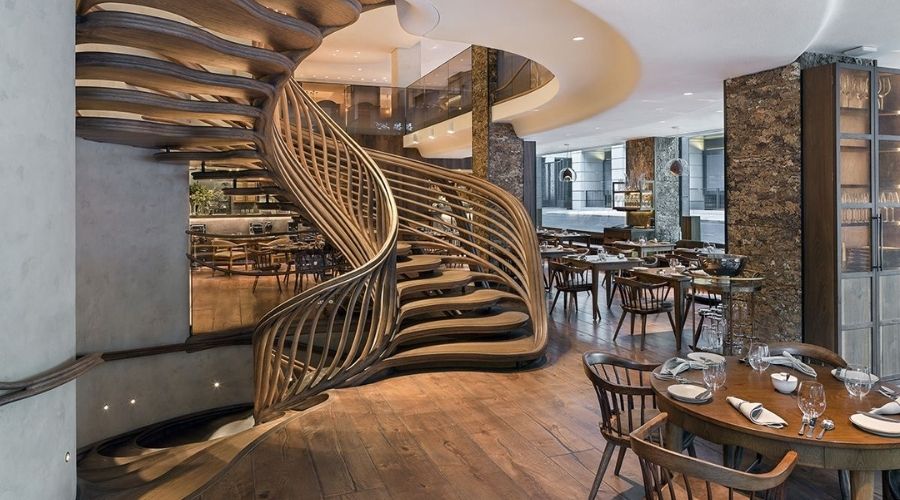 Chef Ollie Dabbous’ new baby is conceptualised around a tree with a sinuous wooden staircase that winds through three levels. Dubbed the StairStalk, the centrepiece guides guests upwards by a wavy balustrade. The earth-toned interiors mirror the views over nearby Green Park, creating the feeling of sitting inside an elvish forest.

Each level showcases a different menu. Ground offers all-day, à la carte dining, Above features complex tasting menus and Below is a bar and wine cellar with cocktails by Oskar Kinberg.

Why we love it: patrons have access to Hedonism’s 6500 bottle wine list, with your bottle of choice being delivered directly to the restaurant on request. 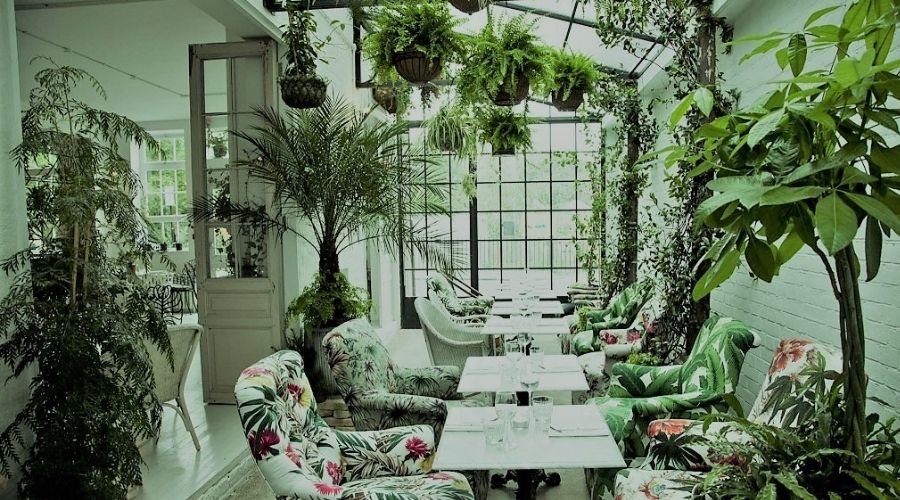 B&H Buildings is an event space featuring a restaurant unlike anything you've seen before. The space takes inspiration from the faded grandeur of an abandoned country manor where the gardens have overgrown into a tangled mass. Modern colour palettes meet exposed wooden beams, watched over by a verdant jungle of trailing greenery that makes it hard to believe you’re indoors.

Why we love it: B&H is known for its exquisite bottomless brunches – many an FCI team meeting has turned into an all day razzle over drop scones and bloody Marys. 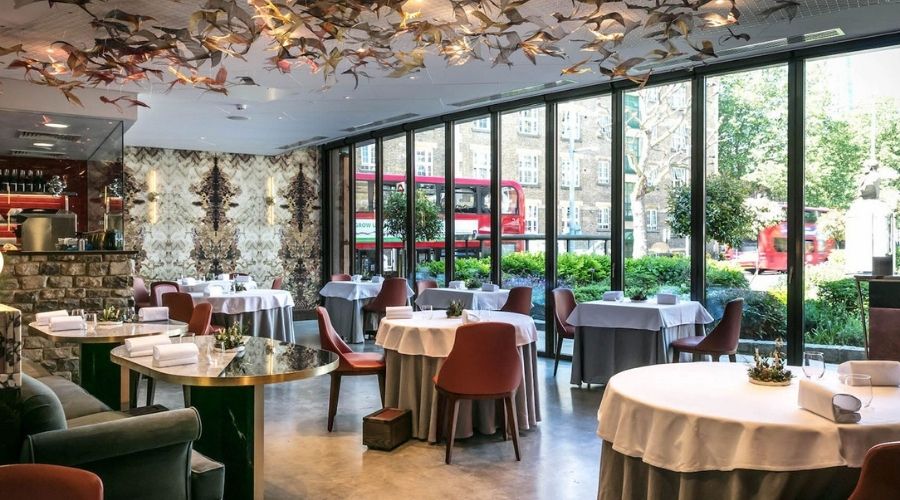 Wunderkind chef, Tom Sellers, dreamed up Restaurant Story at the age of 19 and had his first Michelin Star by age 26. Instead of set menus, he creates tailored tasting menus designed around guests’ personal preferences that narrate your dining experience.

The Scandi lodge-style building used to be a Victorian lavatory and is now a gorgeous Nordic-influenced interior full of warm tones and contemporary art, culminating in a startlingly beautiful ceiling installation.

Cuisine: proudly British with more than a touch of the ethereal – think edible flowers and dainty amuse-gueules.

Why we love it: try the much talked about beef-dripping candle which slowly melts down in its holder, allowing you to sop it up with freshly-baked sourdough. *chef’s kiss* 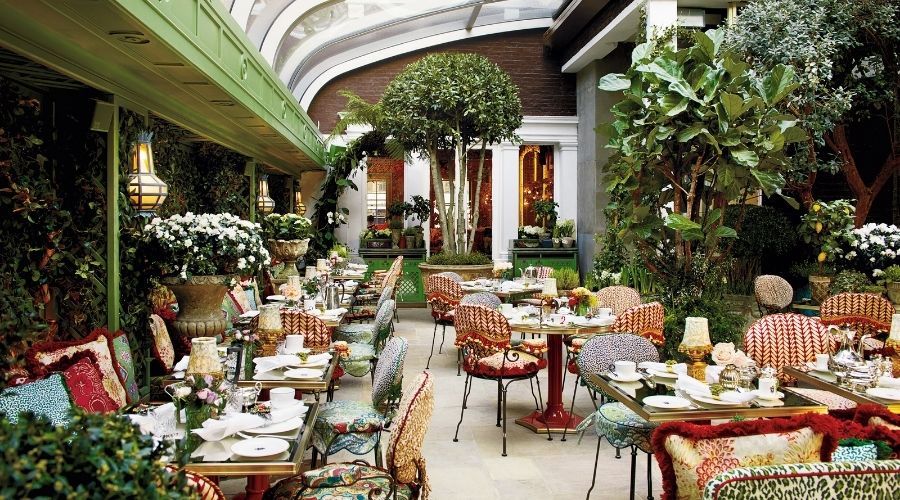 A private member's club with a global reputation, Annabel's is experiencing something of a renaissance after topping every in-vogue list from the 60s through the 80s. The club underwent a refurbishment in 2018 which resulted in a very flashy makeover; 'out-and-out gilt-trimmed maximalism' trumpeted one publication.

Cuisine: Italian, French or British depending on where you choose to dine

Why we love it: the exclusivity, knowing that the late Lady Di dined there alongside the Rolling Stones, the fact that Ridley Scott made a documentary about it - it's all there! 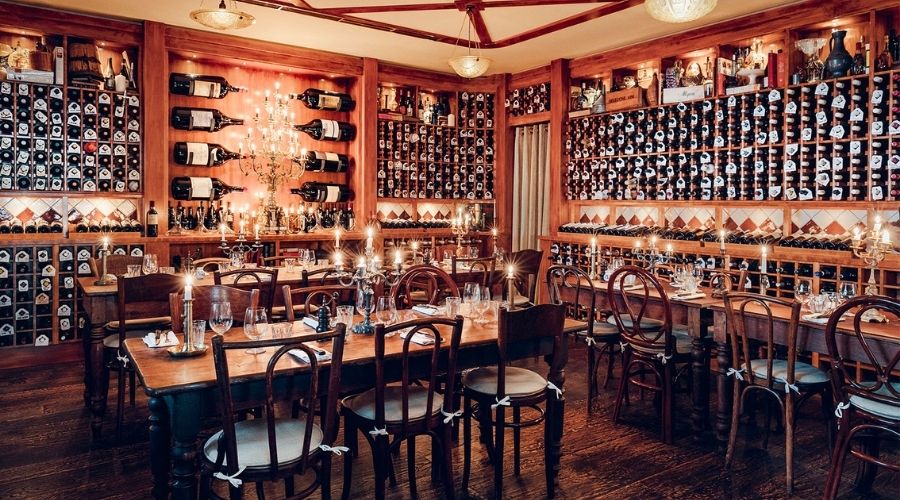 From uppity member's club to the most welcoming establishment on our list; Gloria is an all-day trattoria known for its decadent Italian dishes, yesteryear decor and boisterous hospitality. The dining room is a re-imagining of a Fifties-style trattoria complete with over-the-top striped booths, ceramic plates and hanging ivy, while the downstairs lounge screams 70s kitch with its many shades of brown.

By day the trattoria serves up Italian classics with a cheeky twist; by night the joint turns into a funky house lounge where cocktails flow freely alongside the neverending stream of pizzas.

Cuisine: it doesn't get more Italian than this!

Why we love it: Gloria has her tongue firmly in her cheek, from the bold sass of the staff to the one-way mirrors in the toilets. This place is popular with the Instagram crowd and the layout respects its audience - it's one of the few places you can dine in London with a big group. 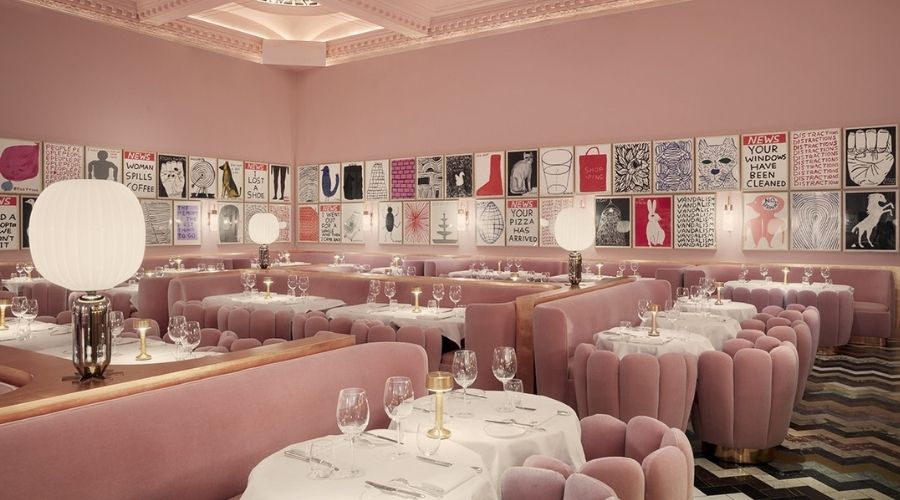 Sketch is a London institution that many argue is the fairest of all the worthy competitors on this list. Sketch is quite simply fuelled by art. It pervades the walls, the hopscotch court-painted floor and the individual egg-like pod toilets that look like they're about to pop out Lady Gaga at any moment. And the food - the food is a thing of such beauty that avid Instagrammers will spend more time on their phone hashtagging #foodporn than on their dining experience.

From the wall-to-wall dusky pink of the Gallery to the enchanted fairytale forest of the Glade, a lunchtime spot complete with a lush carpet of pine needles and lifelike grass, each new dining room will leave you freshly awestruck.

Why we love it: Why we love it: for its deeply luxurious afternoon tea. And it's not just the melt-in-your-mouth blackcurrant meringue kisses - it's your personal tea master, your caviar man and the string trio playing classical compositions alongside The Beatles. One word - go. 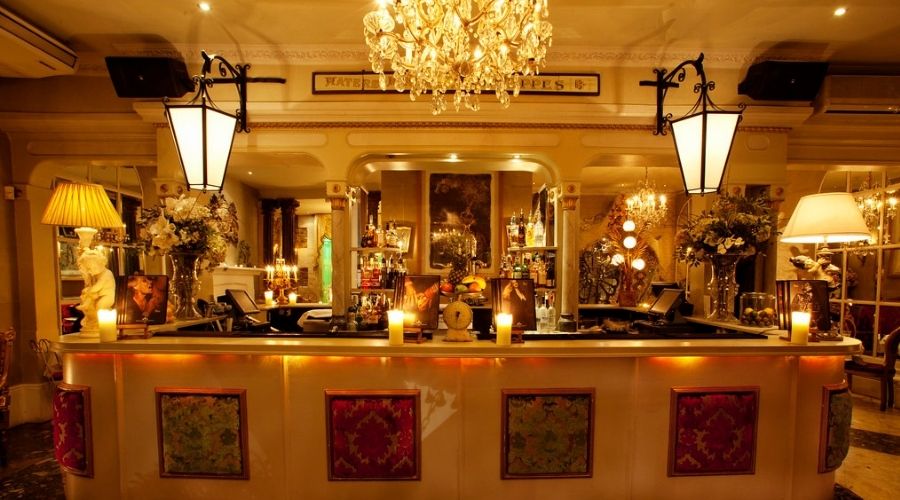 Known as BBB to its longtime fans, this Notting Hill favourite is set in a stunning Georgian Mansion and is comprised of a number of individual rooms, each decorated in its own tasteful and unique style. From the crypt to the chapel to the elegant private ballroom, you’ll feast your eyes on French country chateau, palatial Baroque and the asymmetrical gilding of Rococo.

Stately fireplaces, majestic chandeliers and lavish furniture complete the experience, while Disney-style drawbridges and staircases winding to who knows where enhance the overall mystique.

Why we love it: formerly a place of discreet elegance, BBB has changed somewhat over the years thanks to features on reality shows like Made In Chelsea, yet it has retained its rolicking, crowd-pleasing atmosphere that is ripe for a good night out. 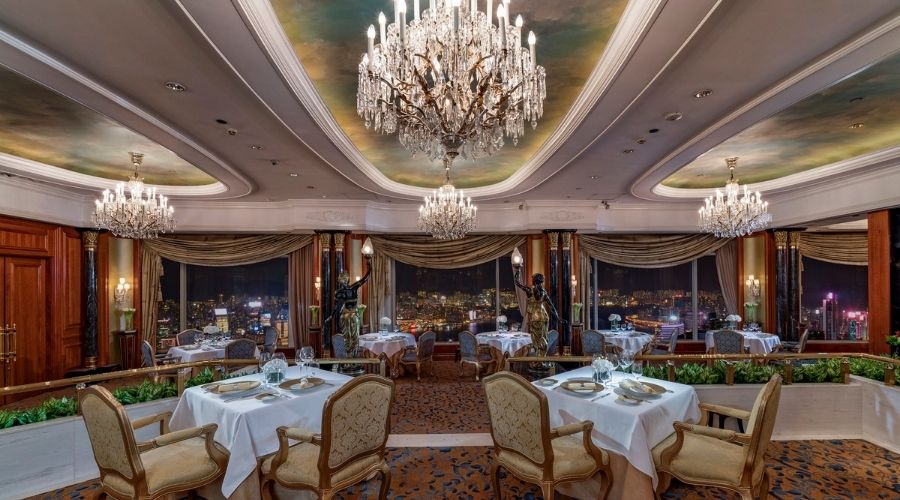 Petrus is a modern French affair that makes this list purely for its evening elegance and gorgeous views across the twinkling lights of London. While his other restaurants may be better known Petrus exudes classic GR style, while the enormous picture windows milk the location for all they're worth.

Coloured in potentially drab cream and beige, the earthy decor is broken up by splashes of red and a glittering, transparent cylindrical wine store commands centre stage in the middle of the room. The menu is quintessential Ramsey with riffs on Gallic classics.

Why we love it: you can't go wrong with a romantic dinner for two on a clear London night. The amuse-bouches and inter-courses are winners and may include fancy popcorn, tiny lemon-cream cones and even an ice lolly served with dry ice. 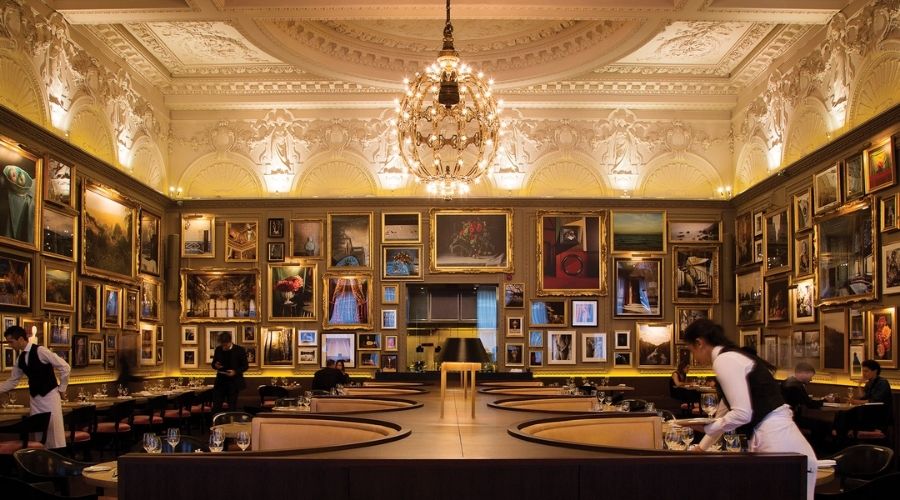 Berners Tavern has some serious credentials. Run by Michelin-starred restaurateur and executive chef, Jason Atherton, it also won the Global Restaurant Award for Best Design in 2016. The relaxed atmosphere is enhanced by all-day dining with a focus on modern European brasserie cooking, but don’t be fooled – eating here feels like you’re dining in the Sistine Chapel.

Berners effortlessly blends historical charm with sophisticated design. Vast ornate ceilings feature intricate plasterwork, while majestic chandeliers survey the profusion of artworks that grace the walls. The menu features fancy British comfort food, but the real star of the show is the sense of occasion.

Why we love it: even if you just stopped by for a quick pint after work, it would be the most legendary pint of your life. That's the Berners legacy in one. 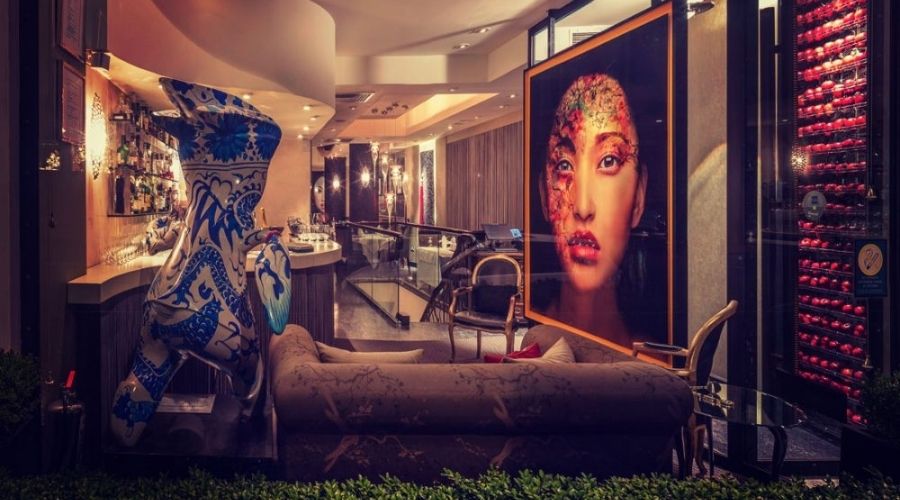 Michelin-starred Kai has twice been ranked best Chinese restaurant in Britain's top 100 restaurants. The interior is glitzy and quietly extravagant, far more Mayfair than Chinatown - but then so is the overall experience, which combines deep Chinese roots with the kind of innovative menu that has diners gasping out loud as their plates arrive.

Owner Bernard Yeoh wanted a fine dining affair to counter the stereotypical image of Chinese restaurants in London at the time. It's safe to say he exceeded all expectations. Expect an updated, playful take on Chinese traditions like medicine shops filled with vials of mysterious fragrant powders and jars of fortune cookies.

Why we love it: four words - Chinese Whispers Afternoon Tea. Surrounded by Maj Jong tiles and the most gorgeous sweet delicacies, we dipped our hands into the 'jar of whispers' and found out things about one another that we'd never thought to ask - you have to try it for yourself. 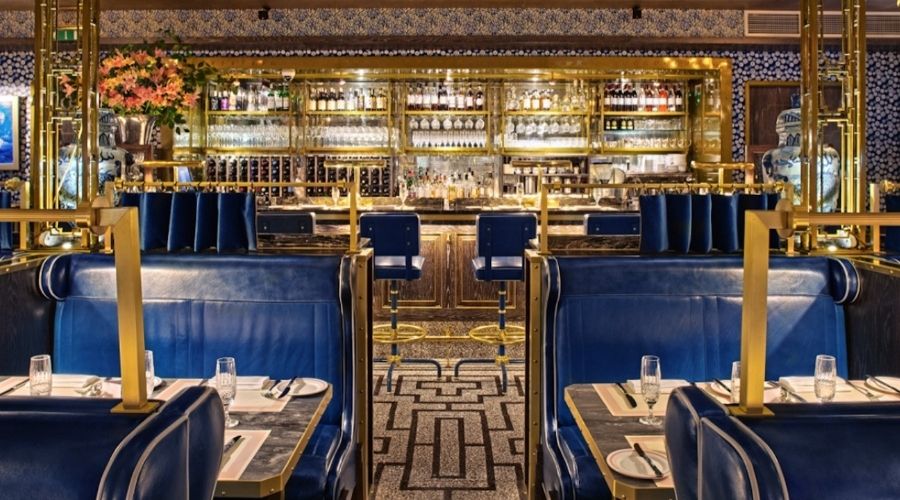 We finish our list with what might be the FCI team’s number one pick for reasons we’ll get to in a minute. Bob Bob Ricard commemorates the roaring 20's, transporting you from the streets of Soho to a carriage in the Orient Express or a party at Jay Gatsby’s mansion.

Everything about BBR screams flamboyance, from the Russian-inspired blue-and-gold furnishings to the lavish menu that serves up English and Russian cuisine. Even the staff dress up for the occasion. The lighting is ridiculously flattering lighting, the cocktails are generous and served with flair and the food is the comfort food of millionaires. In short, this London fixture is not to be missed.

Why we love it: The pièce de résistance that gives BBR the edge is the “Press for Champagne” button at every table. it is famous for pouring more champagne than any other restaurant in Britain. We rest our case.